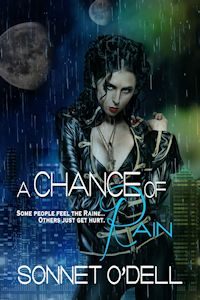 Agent Nicholas Grafton has a plan. To use a convicted criminal to catch other criminals, and he thinks he’s chosen the perfect candidate.

Cera Raine went to prison for the murder of her father. Intelligent, beautiful and resourceful, Cera could have done it but claims she didn’t. Intrigued by Grafton’s proposal she takes it, even with its condition – that she wear a bomb around her neck. Once out, she will do whatever she has to, to get him to trust her, even take down a drug operation plaguing the streets of Central City.

Awards & Praise for A Chance of Rain

– Ms. O’Dell is a gifted story teller who manages to wow me no matter the genre she writes in. Even though the story falls under the sci-fi futuristic category, she does such a good job at world building you can jump right in and not feel lost. Both Nicholas and Cera are great characters who, even though they are total opposites, just might be the perfect complement to each other and I cannot wait to see how they develop over the series. This was an awesome read and a stellar start to a new series. ~ Llaph (Coffee time Romance & More/Amazon.com)

–  Having been a fan of Miss O’Dell’s books for sometime, I was curious to see how her first self-published novel would be and I was not disappointed. A Chance of Rain has blended together mainly of the elements from her other works such as the steamy passion of Mistakenly Mated and Whispers in a Deadman’s Ear. To the question raising mystery and fight action I very much enjoy in her other book series Cassandra Farbanks, which is also worth exploring. The character of Cera is fun, sexy, smart and not shy about fighting if she has to, the story runs at a good pace and has Miss O’Dell usually style of going for the realistic approach to situations and characters. I am looking forward to the sequel just hoping that it will be out soon ~ G. E Rutland (Amazon.co.uk)

– What a thrill ride. Chance of Rain is an amazing erotic sci-fi thriller that will have you reading as fast as you can. I really couldn’t have asked for more out of a book. Cera Raine is a criminal that has been offered the chance of a lifetime. An offer she can’t refuse if she wants the opportunity to prove she didn’t murder her father. Defective Nicholas Grafton is the man in charge of her temporary parole. He created the program, and is testing it with Cera’s help. Giving her a chance to use her skills to better her home.
I love a bad-assed girl character more than anything in the world and Cera doesn’t disappoint in the least. Knowing what she has and using it to her full ability is just awesome. This is a woman who carries herself well and can fight like a man. Getting what she wants every time. I’m still in awe over the more intimate scenes in the book as well. I could feel my heart racing with every page. Though a few grammar errors made me go back and re-read parts until I understood, I loved this book. ~ Jenn Thompson (Amazon.com/Goodreads)

This is a well written, futuristic crime thriller and a great start to a new series. I love Cera Raine. She is a smart and sexy female lead that kicks it! I loved the way the author wrapped up the current story line and still teased you enough to want to read the next book.~ Rose Montague, Author (Amazon.com/Goodreads)
It's only fair to share...